All Posts by admin 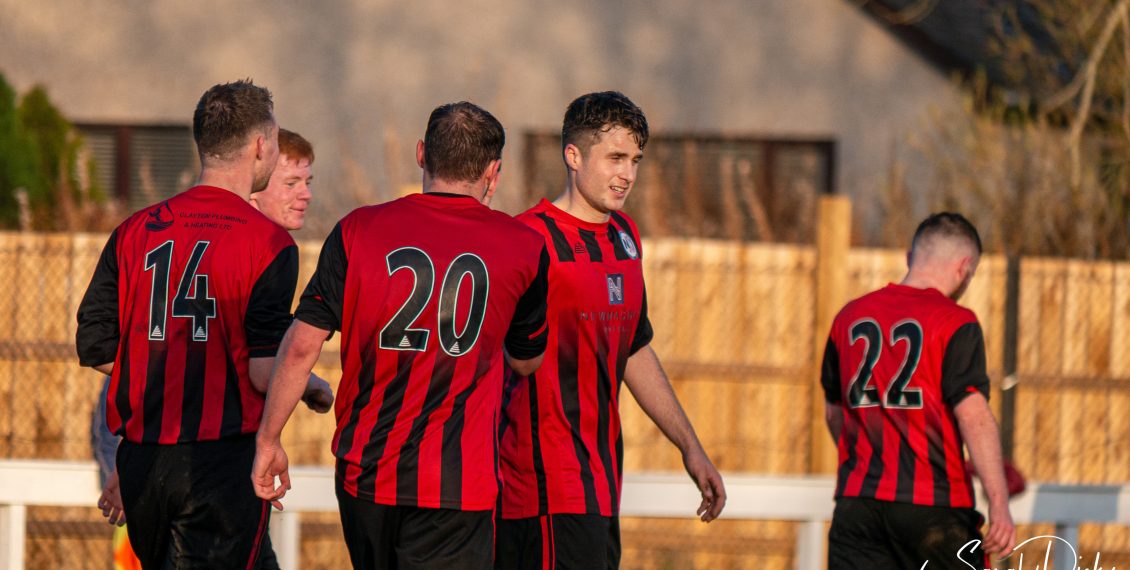 Our last friendly saw us make the trip up to Peterhead to take on the Hearties. The teams had a slight wind to deal with but the Raemoss pitch was in great condition.

Cooper in the Newmachar goal had to be alert in the first minute as he saved low to his left after a wicked deflection. Dawson & skipper Black were soon knocking the ball around at the back and dominating possession and in the 9th minute, Chris Hardie got on the end of Euan Dryburgh cross to head home.

Newmachar were seeing good success down the left with Euan Dryburgh, Dawson & Jimmer linking up well and on the 25th minute, Jimmer sent in a low cross for Josh Reynolds to tap in from 5 yards out.

3 minutes later, some more fine work down the left saw Jimmer hacked down for a penalty. He dusted himself off and sent the keeper the wrong the way for the third of the day.

Euan Dryburgh was next, and 8 minutes later he put a 20 yard effort into the top corner of the net.

Buchanhaven had a spell towards the end of the half where they knocked it around well and got 1 back as the left winger put a dangerous cross across the goal which Murray Dawson headed into his own net from 3 yards.

Newmachar changed Gerrie for Travers at half time and within 3 minutes of the restart he added the 5th. A deflected shot into the bottom corner to end any hopes of a comeback from the Hearties. 2 minutes Jimmer added a 6th and his 2nd of the day.

Newmachar were dominating possession and moving the ball well. Any loss of possession was quickly won back. Stevo was next to get his name on the score sheet with the Hearties keeper spilling his long range effort. 2 minutes later, Hardie added his 2nd of the day and Newmachar’s 8th when he picked up the ball 30 yards out, spun and seeing the GK off his line, chipped the ball into the empty net.

Newmachar made 7 changes and continued to push forward in search of more goals. The final goal of the day wasn’t to come until the 83rd minute when Travers sent the keeper the wrong way from the spot.

A good end to the pre season friendlies before we start the Grill League Cup with a trip to Sunnybank. 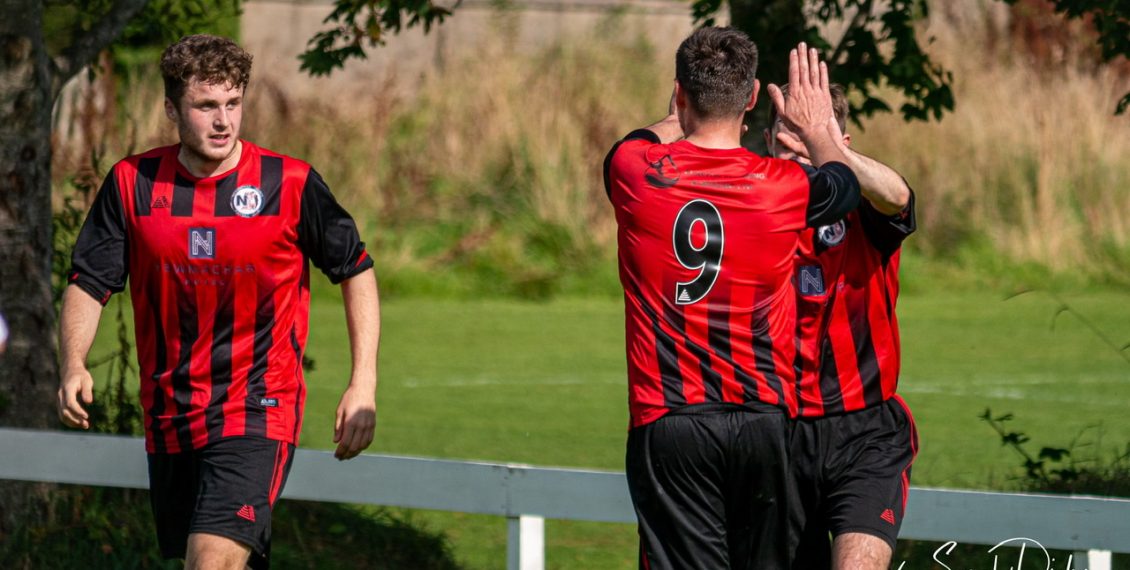 The club are delighted forward James McMahon (21) previously of Glendale AFC has signed after impressing during preseason. He is big and strong with a good first touch so will bring competition to our front line and great he has chosen to make the step up from the Amateur Leagues.

Jimmer had this to say…

It feels good to sign for a great club like Newmachar! The motivation and ambition on show from the club is fantastic to see and I am really excited to be a part of it.

Jimmer is a great bloke & joy to work with. He trained with us at Banchory with a view to signing this season so we’re delighted he chosen to join us here. I’m looking forward to working with him over the next few years and seeing his development. He’s looked sharp in the games so far and chipped in with a few goals too. He’ll learn a lot from Hardie and also Danny, who’s just retired and joined the coaching team, so Newmachar is a great place for him to start his junior career.

Jimmer will wear shirt #17 & is sponsored by #gregcamali.
Welcome to the club, Jimmer!

The club are absolutely thrilled to announce the signing of ex Superleague Banchory St Ternan midfielder and league and cup double winning Captain Steve Travers (29) after he was released. He brings experience, leadership and a great work ethic to our midfield. We are delighted he chose us over a number of other Clubs who had expressed an interest in signing him.

I am delighted to sign for Newmachar. Upon leaving Banchory St Ternan I really wasn’t sure if I’d continue playing football but after speaking to Brian and John and seeing their ambition matched that of the new management team who I had success with at Banchory, I couldn’t wait to be a part of it. Looking forward to the start of competitive football and hopefully push for trophies this season.

The new gaffer had this to say on Trav’s arrival.

Absolutely delighted to get Trav on board. He’s a winner. We went through a lot of ups and downs together at Banchory and he’s a guy i know we can trust. His drive and determination will be needed as we push to move Newmachar forward over the coming seasons and knowing we attracted him here when there were a few other superleague clubs after him, shows how exciting the project at Newmachar is.

Travie will wear shirt #8 & is sponsored by Mike Buchan Electrics of Ballater.
Welcome to the club, Trav! 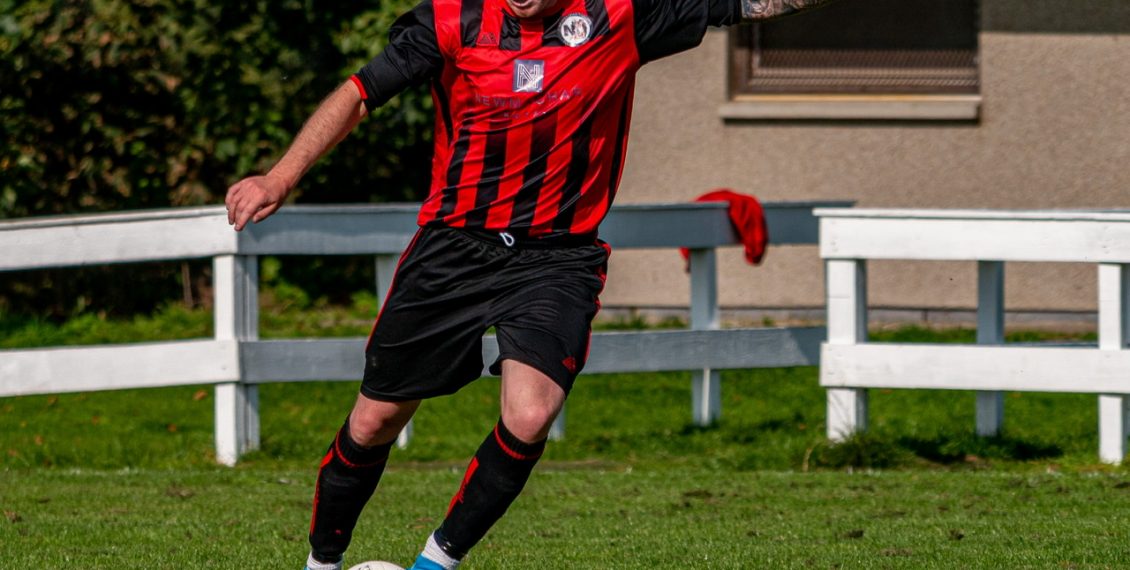 Stevo will wear shirt #6 & is sponsored by Aberdeen Electrics Centre.
Welcome to the club, Stevo!
Oct 13
0 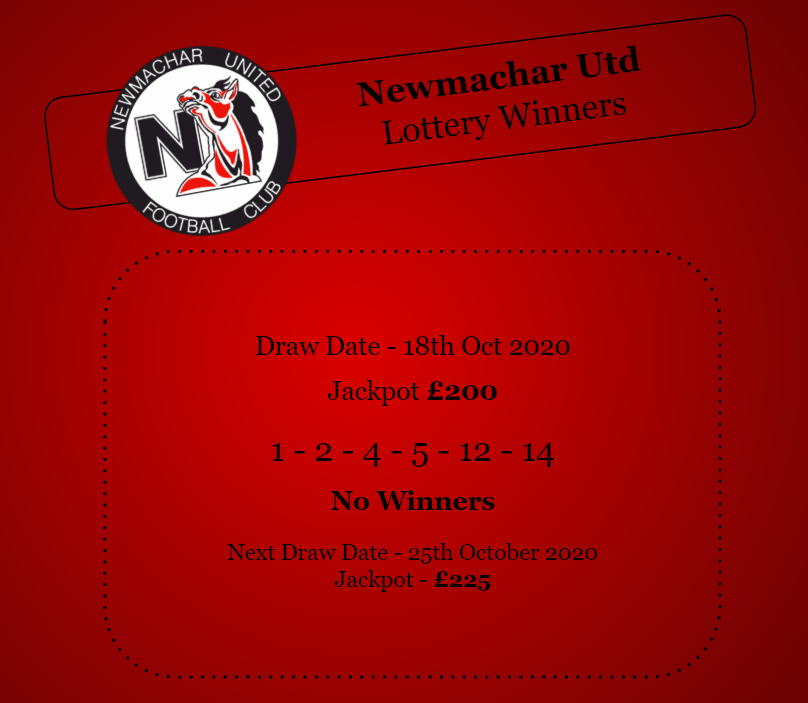 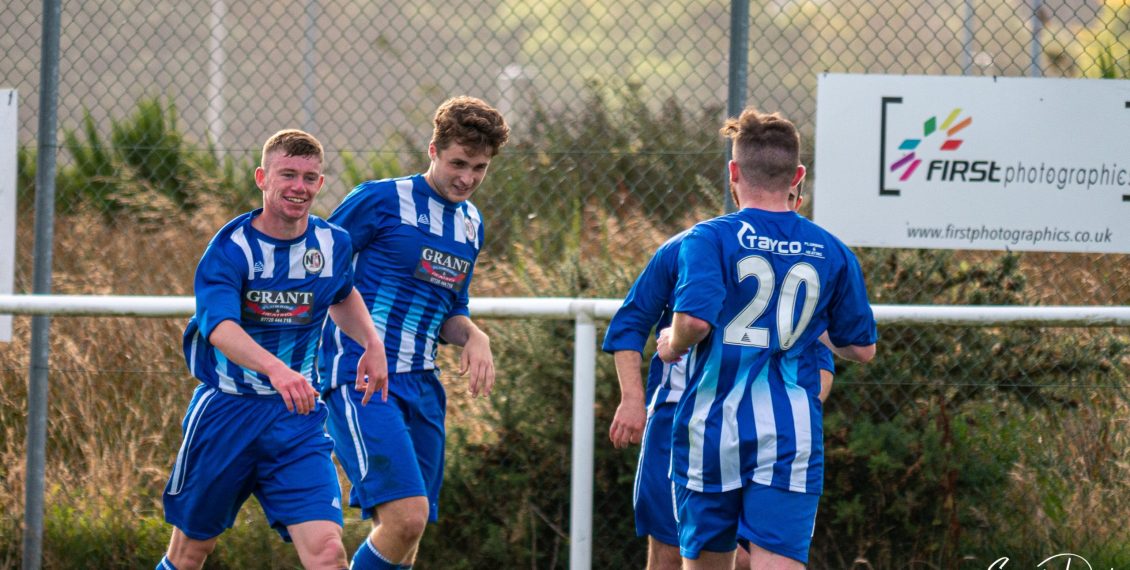 Newmachar had Callum Macdonald (knee), Chris Hardie (achillies) and Greg Wood (knee) missing through injury while Murray Dawson was away with work.

Dylan Forsyth and Callum Stewart came back into the squad for the second friendly against Stoneywood Parkvale. Newmachar played up the hill and into the wind in the first half and took the lead through a Dylan Forsyth penalty, sending the keeper the wrong way after he was bundled over trying to get on the end of a wicked Callum Saunders cross.

The hosts were soon level after a mix up inside the 18 yard box saw the Vale striker nip in front of Stevo Young, who clipped his ankles while trying to recover. The referee pointed to the spot and it was 1-1.

8 changes at half time saw Newmachar take 10 minutes to get up to speed with the game. Into the last 10 minutes of the game, a cross from the Vale right was headed home to give Vale the lead but nearly instantly, a wonder through ball was chipped over the Vale keeper by James McMahon to level.

A very good Newmachar performance in blustery conditions and another game under the belt in preparation for the coming season.

Next week we visit Sunnybank FC.

After a 7 month layoff, it was great to finally see some football being played at Charlies, and in roasting hot conditions, Newmachar Utd got their friendly schedule off to a winning start with a 3-1 win over FC Polska.

Right from the off, both teams looked to get the ball down and play. Newmachar were looking dangerous and Chris Hardie had an early chance which he saw go over the bar.

Polska were also creating chances of their own and were unlucky on a few occasions. A better end product could easily have seen them take the lead.

Hardie was looking lively and saw a few great chances saved. He did finally manage to put the ball in the back of the net but ref Joel Kennedy blew for offside.

What looked like a stonewall penalty for a late challenge was waved away. Machar weren’t to be denied much longer and after a good move through the middle orchestrated by Young, was pulled back by James McMahon for Conor Watt to fire high first time, into the roof of the net.

Polska went close just on half time with a misunderstanding at the back saw keeper, Rthys Bain smother at the feet of the big Polska striker.

Half time saw the new Machar management team introduce 9 new players. Polska made 3 changes to their line up.

It wasn’t long before Newmachar hit their second. A wonderful pass from Josh Reynolds split the defence and Matty Tough ran through and got to the ball just before the on rushing Polska keeper who pulled him down with Joel Kennedy pointing to the spot.

Tough took the penalty himself and sent the keeper the wrong way.

Polksa were starting to tire in the heat, but after a great save from Rthys Bain, he gave away a penalty from the resultant corner.

The big striker made no mistake from the spot.

Any hopes of a Polska comeback were short lived as minutes later, an inch perfect Saunders cross was turned home by Greg Wood to round of a fine display from the home team.

FC Polska gave a very good account of themselves and we wish them all the best for the season ahead.

Next Saturday sees us travel to take on Stoneywood Parkvale in our second friendly.

Newmachar United Juniors FC joined the North Region Juniors FA in 2010 and won the Elginshire cup in our first season. We play our home games at Charles Gordon Park, Newmachar.