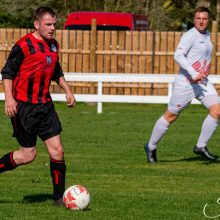 The club are absolutely thrilled to announce the signing of ex Superleague Banchory St Ternan midfielder and league and cup double winning Captain Steve Travers (29) after he was released. He brings experience, leadership and a great work ethic to our midfield. We are delighted he chose us over a number of other Clubs who had expressed an interest in signing him.

I am delighted to sign for Newmachar. Upon leaving Banchory St Ternan I really wasn’t sure if I’d continue playing football but after speaking to Brian and John and seeing their ambition matched that of the new management team who I had success with at Banchory, I couldn’t wait to be a part of it. Looking forward to the start of competitive football and hopefully push for trophies this season.

The new gaffer had this to say on Trav’s arrival.

Absolutely delighted to get Trav on board. He’s a winner. We went through a lot of ups and downs together at Banchory and he’s a guy i know we can trust. His drive and determination will be needed as we push to move Newmachar forward over the coming seasons and knowing we attracted him here when there were a few other superleague clubs after him, shows how exciting the project at Newmachar is.

Travie will wear shirt #8 & is sponsored by Mike Buchan Electrics of Ballater.
Welcome to the club, Trav!