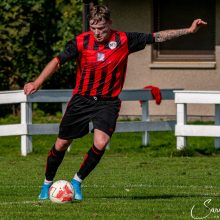 Stevo will wear shirt #6 & is sponsored by Aberdeen Electrics Centre.
Welcome to the club, Stevo!