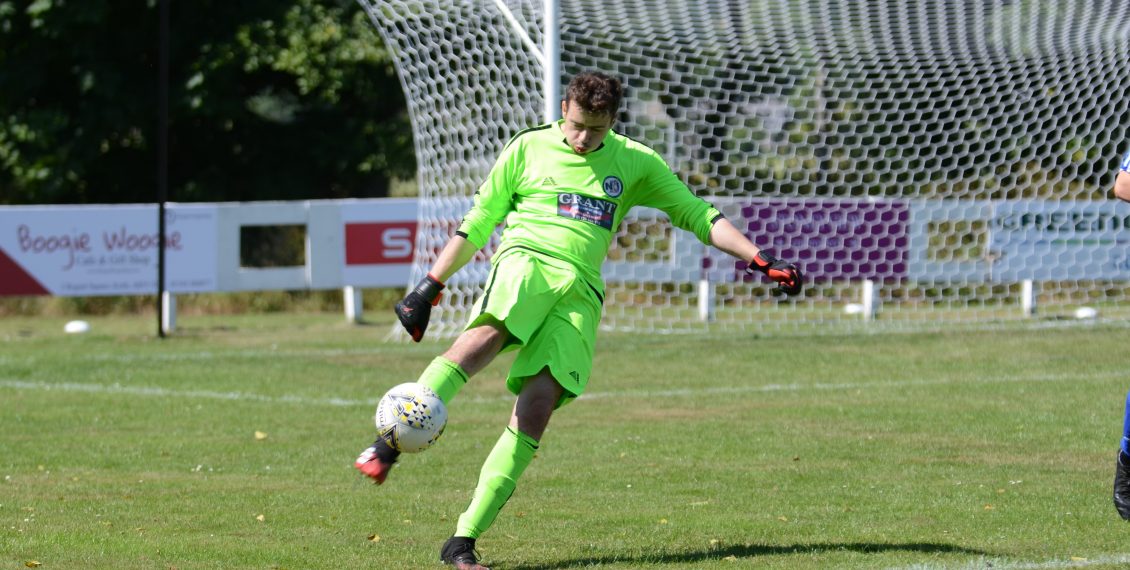 We welcomed Burghead to a warm Charlie’s for our first home game of the season.

We started off slowly and Burghead had a couple of chances in the opening few minutes when Mitchell saved comfortably from a shot from the edge of the box and then a last ditch tackle from Robertson deflected another shot just past the post.

We then found our feet and created a few chances including a Whelan long range effort that went wide with the keeper off his line, he then had a shot blocked after he had followed up a McMahon cross come shot that had been saved by the away keeper.

McMahon then had a couple of headers that he put wide from about 6 yards. We did eventually take the lead after 27 minutes when McMahon was tripped in the box as he got to the ball first. He stepped up and scored his second penalty in 2 games by putting the goalkeeper the wrong way.

We kept on going but the half ended with us being 1 up.

We started the second half at a better tempo and it was no surprise that we increased our lead after a good passing move found Young 25 yards out and he strode forwards and hit a shot from 20 yards that went in off the right post.
We stretched our lead again just before the half hour when after a good passing move the ball was played out to Tough who beat his man and then once into the box he cut the ball across the box and when McMahon’s shot was blocked Reynolds pounced and drilled the ball past the keeper.
There was not much more real chances as both teams cancelled each other out.
In the 40th minute the away side scored after a speculative cross found the far right corner of the goal.
A couple of minutes later we restored our 3 goal lead when Reynolds took a free kick on the right and Young made a good run to the front post and he flicked the ball past the away keeper.
We managed to see out the final minutes.

We caught up with the gaffer and the captain, Davie Black after the game to get their thoughts…

Obviously delighted to get the 3 points. Another 4 goals and probably should’ve had a couple more but we’ll take it. We’ve not played particularly well and with a very sloppy start we were fortunate not to go behind. Burghead had a couple great opportunities to score through our sloppy passing. I felt we upped the tempo a bit in the second half and looked dangerous going forward. It’s more experience into our young side. Not every game will go to plan and sometimes you need to find a way to get over the line when you’re not playing that well and they’ve done that today.

First & foremost getting the 3 points was the main aim and we did. First half was a bit stop start and we didn’t really get into a rhythm. Was a much improved 2nd half and we were ruthless when we needed to be. Still plenty room for improvement but the signs are there.