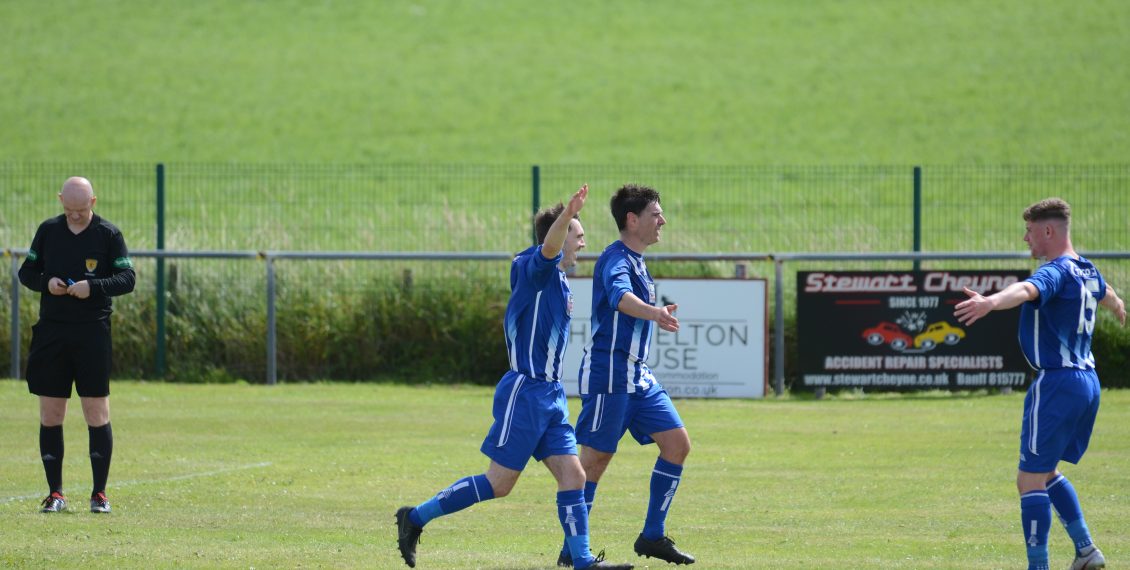 We travelled up to Banffshire for our opening game of the season on a warm but windy day by the coast, missing club captain, Davie Black, vice captain, Stevo Young, the Dryburgh brothers, Greg Wood and Callum Stewart.

Ryan Whelan captained the side on his competitive debut for the club and it got off to the perfect start with a goal after only 2 minutes when Tough outpaced the home defence clipped the ball past the goalkeeper and slid it into the net.

Machar were in control of the game but the home side had a couple of chances when they had hit the crossbar from a long range wind assisted shot and then Mitchell saved a header with his feet. We had created a few chances but failed to convert them until the 23rd minute when Robertson headed in a Walton corner.

We then went further ahead when Gerrie got onto the end of a clever lofted cross by Tough after he had beat a couple of home players on the flank. Gerrie had the ball in the net again but he was adjudged to be offside.

We took control of the second half from the kick off and Tough extended our lead in the 55th minute which was then added to 10 minutes later when Watt who had replaced Whelan drove a shot into the net after a Robertson free kick was parried away by the keeper.

We then lost our way for 5 minutes when firstly the home side scored from the penalty spot after a Tough handball. The home side then got a quick second when their forward headed past Mitchell from close range after a cross field cross.

But we stretched our lead almost instantly when McMahon drilled a shot past the advancing keeper after a great through pass from Reynolds and two minutes later Hardie scored after a quick break and pass from Tough put him through on goal and he made no mistake from 10 yards.

We saw the game out but still had time to miss another couple of chances including Forsyth hitting the bar from close range.

A great start with some good team goals and all of the front 3 getting off the mark, and young Mitchell, Duthie and Davidson making their competitive debuts for the Club.

We caught up with the gaffer and then the stand in skipper, Ryan Whelan after the game to get their thoughts…

We were looking for a quick goal and couldn’t have asked for anymore with Matty putting us ahead in 2 minutes. I felt we were in control for the majority of the game and kept good possession on a fiery surface. Disappointing to lose the second goal which takes the shine off it a bit and some small lapses in concentration put us under a bit of pressure at times but other than a handful, we’re a young team and those wee mistakes will happen. Great to see the front 3 all getting off the mark and others chipping in with goals too. I thought the whole team were solid and especially young Josh, always looking to get on the ball and Muz at the back never really put a foot wrong. As everyone else, i’m delighted to be back in competitive action and get the 3 points from a tricky away fixture.

It was great to finally be back playing competitive football again. I thought we were excellent from minute 1 and had a great start, then controlled the game really well from then on, on a fiery pitch. Few things to improve on but all in all a great team performance.