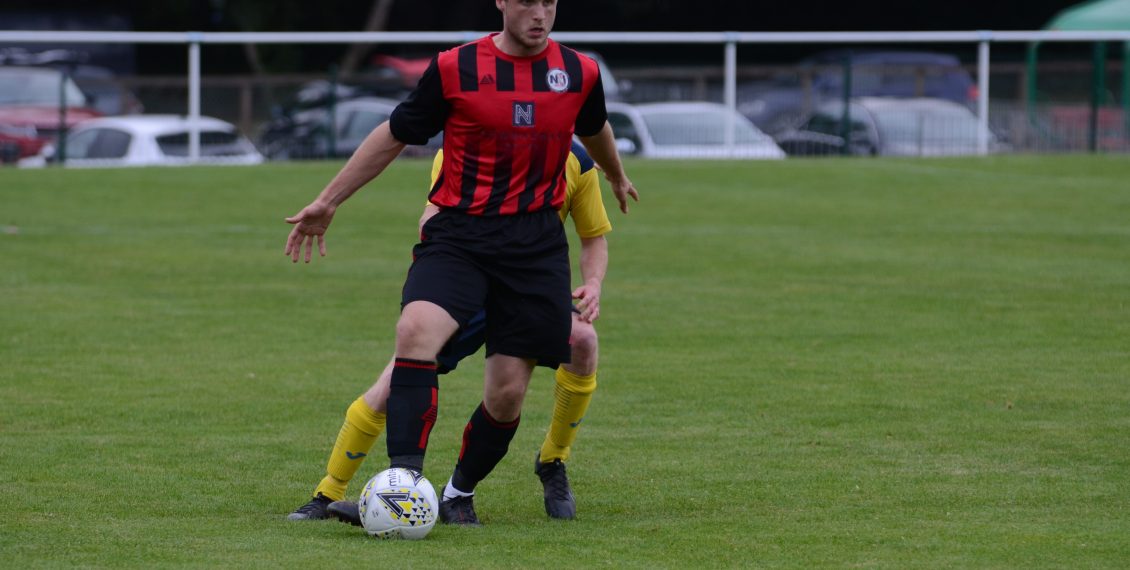 We travelled to Rothienorman to play Rothie Rovers for the first time in Junior football and thus creating our own Aberdeenshire local derby.

We were still missing skipper Davie Black, Greg Wood & Callum Stewart but welcomed back Stevo Young and the Dryburgh brothers.

The game kicked off and Rothie dominated the game as they started on the front foot and at a quick tempo we struggled to contend with and couldn’t keep any real possession in the opening 15 minutes.

Mitchell had to be at his best to save a shot from their forward and then Dawson put his body on the line and blocked the follow up shot.

We were awarded a penalty against the run of play when the home defender handled the ball above his head on the bye line under pressure from McMahon, who then stepped up and expertly smashed it past the home keeper.

We then could have went further ahead when Hardie saw a snap shot from 25 yards just go wide.

We took heart from this but Rothie were still the better side without really causing too much problems until we put ourselves under pressure with some slack passes along the back that was snapped on by the home forward and although his first shot was saved by Mitchell it wasn’t cleared and he got another chance to shoot and this time it ended up in the net after it was deflected past Mitchell by Dawson as he tried to block the shot.

The rest of the half was quite even with both sides creating half chances but none were taken.

The second half was a good old fashioned game as both teams tried to look for the winner but most of the play was breaking down in the final third as crosses went astray and shots went high or wide.

We thought we had won it with 20 minutes to go when Dawson scored with a header from a corner but the referee saw an infringement in the box and chalked it off to everyone’s disbelief.

We then took more control of the game for the final 15 minutes and created a couple of good chances with the home keeper pulling off a good save from McMahon and then another from Watt. There was still time for the home side to snatch it as the home forward beat the offside trap but a great tackle from the retreating Young saved the day.

A good competitive game between the teams and although disappointed with only a point after our goal was disallowed but it means we have got off to a good start to the season and this performance showed that we can battle and dig in for points as it wasn’t our best performance possession wise but credit to Rothie who played at a high tempo and closed us down quickly.

We caught up with the gaffer and the vice captain, Stevo Young after the game to get their thoughts…

It was a tough night for us in terms of trying to keep the ball with the tempo of Rothie’s press on the tight pitch, but other than a spell leading up to their goal where we put ourselves under real pressure with some sloppy passing, i thought we dealt with it really well. You’re not always going to get time on the ball and our young boys will learn from playing in games like that and dealing with the physical side of the game too. All that said, i felt we created the better chances and from that probably should’ve won the game, especially when you watch Muz’ header back and see it’s a perfectly good goal and should’ve stood.

But we’ll take the point away from home against a good side who i don’t think will drop many points at home this season. A big strong physical side with a lot of experience, Rothie will be a credit to the north region juniors both on and off the park.

I’m impressed with a very good set up at Rothie and the committee have done a fantastic job however i was surprised at the size of the pitch which was very tight and didn’t suit our style of play. Their high press caught a few of our younger players by surprise but i thought we defended well and limited them to long range efforts. 1-1 is probably a fair result but in my mind it’s 2 points dropped.